I write you from John Glenn International Airport in Columbus, Ohio, where I’m waiting for the second day in a row to see if a nor’easter will keep my dinky plane from landing at LaGuardia. It’s been a good visit home, but a bit of a rough one — we’re clearing out my parents’ house so my dad can move next month. That means sorting through all kinds of artifacts and memorabilia, one of which was my grandfather’s 1959 edition of Gray’s Anatomy. Good thing we did; my cousin found three pristine front pages from the 1960s, two of the moon landing and one on the assassination of JFK.

You rarely get to see these things in 3-D; the backs of the moon landing page especially were fascinating (particularly given my love of Hidden Figures): 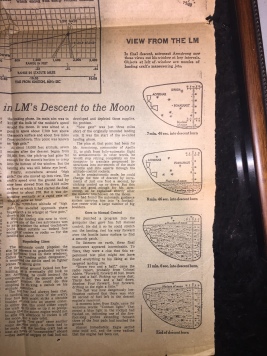 We also found New Yorker medical ethicist and essayist Dr. Atul Gawande, who grew up down the street from me, in my sister’s middle-school yearbook. Uh, I might wait to share that with the world — he might have something to say about that picture.

Other ways in which the world is moving backward, bad and good!